Intermission is the Omnitrix's DNA sample of a Kerotops Communication Module from the Schwarzsi Anomaly. He is a free use alien.

Intermission is a large robotic humanoid with a wide stature. He has a simplistic cylindrical head, with a bar-like sensor running around it on which an orange bar acting as his eye operates. In his chest is a huge television monitor, onto which the user can project their thoughts or an intercepted visual signal. He has thick, pipe-like arms each ending with three-fingered hands. He has six sub-woofers, two in each shin and one in each hand.

In Earth-1010 when talking normally, Intermission will use the face of Software on his monitor.

Intermission is a powerful sonokinetic alien, capable of shaking buildings apart with his noise.

Intermission's unique selling point is his ability to produce, receive, and intercept transmissions. This includes radiowaves, extranet, and internet transmissions. He can then relay these transmissions through the monitor in his chest. Alternatively, he can also broadcast his thoughts in a visual format this way.

He can be overwhelmed if he intercepts too many signals at once, becoming confused or even hurt.

His sonokinetic powers are totally useless in a vacuum.

Intermission is a free use alien, feel free to use him in your own series. 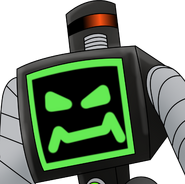