The Infinity Omnimatrix, often referred to as the "Infinity" or "Omnitrix", is an Omnitrix used by Bryce Bowman in Bryce Bowman: Origins, and Bryce Bowman: Devil's Bounty.

The Infinity has had many different forms over time, but the current version resembles a sports watch, with the Omnitrix dial on the faceplate. Its band is black the faceplate is green.

These are not forms all seen in the series, just forms that I made up and enjoyed for a while.

Active Mode is the Infinity's default mode - the Infinity can be used and nothing is wrong. Transformations last for an average of one-and-a-half to two hours. However, the user can revert back to human anytime they want. Quickchange transformations will reduce the usage time, as will activating the Ultimizer. The absolute maximum time the user can be transformed varies between each form.
Recharge Mode's main purpose in earlier prototypes of the Infinity was to keep it from damaging the user by staying transformed for too long, however Azmuth patched that issue out of the new one, so now it is more based on power usage. It's deactivated automatically, once the Infinity is recharged. When the user is in alien form and the Infinity is about to time out, the symbol will beep and flash red for a few seconds before covering its user in red light. If the user reverts by their own volition, they will revert straight away in a flash of green light instead.
The Infinity senses DNA nearby that can either be scanned and sampled as a new transformation or DNA that is already within the Omnitrix's databank, but is not currently unlocked. The Omnitrix will usually lock all other modes until the new DNA is cataloged. When in close range of the new DNA, the Omnitrix will send out hundreds of small nanites that appear as beams of yellow light which take in scans as well as blood and tissue samples to analyze and form a new entry in the DNA bank.
When the Infinity enters recalibration mode, it locks. Usually not for a very long time, but it can still be a hindrance. The main purpose of recalibration mode is for the Infinity to automatically update its own software to make improvements or patch bugs or even repair physical damage. It is also used to reset playlists. Sometimes, when making major repairs or updates, the Infinity will change its appearance. Although it might not be apparent if the disguise function is working properly.
Quite simply, the Infinity is displaying a pre-loaded or scanned map for the user to look over. This can also be used while tracking another Omnitrix to pinpoint exactly where it is.
The Infinity begins pulsing red light quickly, and in short bursts while beeping in while with the pulsing light. It is detecting something nearby that could be potentially harmful to either the user or by-standers. The Infinity will beep continuously until acknowledged by Bryce.

Danger Early-Warning
Add an image to this gallery

The Infinity with the dial down 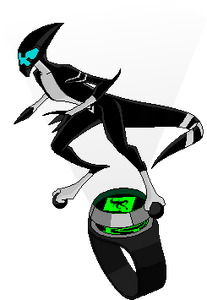 The Infinity displaying a hologram 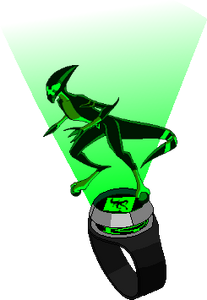 The Infinity displaying a green hologram

The Infinity displaying a silhouette 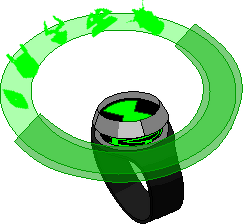 Retrieved from "https://ben10fanfiction.fandom.com/wiki/Infinity_Omnimatrix?oldid=912763"
Community content is available under CC-BY-SA unless otherwise noted.