Start a Wiki
The Incurseans are a race of toad-like aliens who can't get enough of war.

The Incurseans are a technologically advanced frog-like species from a planet that was destroyed long ago.

Under the leadership of the tyrant leader, Lord Emperor Milleous, the Incurseans have stepped up their game to become even more hyper aggressive warrior-gangsters out for galactic conquest around the universe. Princess Attea worked her way back into her father’s good graces. She was a general and was given command of the Incurseans' celebrated Calaveras Legion. Attea had a plan to take over using Earth and Ben Tennyson, which succeeded. She is now in charge of the Incurseans.

The Incurseans have been a violent, spacefaring race for a millennia. Their original homeworld was divided into many factions in an eons-long civil war.

A millennia ago, a warrior attempted to reunite the planet with the power of Ascalon, which he stole from Azmuth. The result of misusing the sword's power, however, was the destruction of the Incursean homeworld.

The Incurseans look like anthropomorphic toads.  They can be heard making frog sounds.

Male Incurseans have either slim bodies, warty toad like heads and yellow eyes or in larger forms with an even greater toad like appearance.

Female Incurseans, from the single seen so far look very little like the other gender of their species. Attea, the only female Incurseans seen so far, looked almost completely human in Alien Force except for the not wart ridden green skin, yellow sclera with red pupiled eyes and slightly larger mouth.

According to Matt Wayne, most Incurseans have very poor diets.[1]

Incurseans have a frog-like tongue that is long and sticky. They also have enhanced jumping abilities, like frogs.

Incurseans appear to be very sensitive to smells like burning rubber, compost, and the smell of Swampfire, which causes them to faint.

In combat, Incurseans use blasters and wear blue, or white, armor.

To travel, Incurseans possess spaceships and small fighter ships (use by members of the celebrated Calaveras Legion). 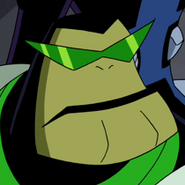 Retrieved from "https://ben10fanfiction.fandom.com/wiki/Incursean?oldid=738800"
Community content is available under CC-BY-SA unless otherwise noted.