Indy Cineroar is a hero in Pokémon Sky. He first appeared in Murder on the Prototype Express. He is from The Off-the-ground.

He is tough and heroic.

He has pyrokinesis and a mastery of dirty tricks.

He knows the moves Darkest Larait, wherein he spins into the target, Circle Throw, which throws the opponent, Cross Chop, a Dragon-type attack, and Revenge which boosts his power upon being attacked.

He taunts after every attack.

Incineroar and Sceptile are a lovely romantic couple.

Incineroar is a good father to Sobble.

Tony and Incineroar get along incredibly. 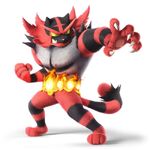