ImmoBile, named Spitter by Ben 10'000 in the "Former Future" timeline, is the Omnitrix's DNA sample of a Sphoeroid from the planet Scalpasc in Earth-1010.

ImmoBile is a large, rotund alien with deep murky green skin. A massive black-lipped jaw makes up most of his head with two bulbous eyes in the corners of his mouth. The distinction between where his head ends and body begins is unclear, but around his waist is a green belt with the Omnitrix symbol on it. Black trousers cover his short legs.

ImmoBile can spit out a concentrated blast of slime. The properties of this slime can vary based on what ImmoBile wants to do with it. It can be slippery, acidic, or even made into a fast-acting adhesive that freezes solid after a few seconds. The slime, if slippery or acidic, can be highly conductive. When he spits, ImmoBile inflates into a ball-like shape.

As demonstrated by Ben Delta, without experience ImmoBile may accidentally use the wrong type of spit on its target.

ImmoBile's slime is useless against targets that it cannot adhere to, such as Kraab's Matterphobic Hardlight Plated armour.

His slime is also much weaker in atmospheres that do not allow it to set properly, such as the atmosphere of the Gas House bar in Undertown.

ImmoBile was first used by Ben Prime during the events of the Omniverse story Let's Do the Time War Again in one of the aborted timelines, however he was not used for long and was quickly forgotten about.

ImmoBile, named Spitter by Ben Delta, was accidentally used by Ben Delta in Chapter 5. He was used to immobilise Time Breaker Ben while Ben Prime formulated a plan using Grey Matter. Unfortunately Time Breaker Ben broke free of the hardened sludge and the next volley of slime ended up being acidic, triggering a universal reboot.

ImmoBile was used by Ben Prime to enter the Gas House, and then to fight Koraxx, Kraab, and Sixsix. When Ben discovered that his slime was useless against Kraab he opted to switch to Big Chill instead. 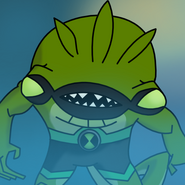 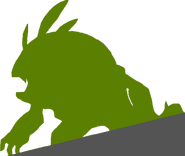