Ignis, the Infernal Queen of Pyros, is a Pyronite villain in Earth-1010. She first appeared in Death of Ben 10 Chapter 11.

As a Pyronite, Ignis possesses all of the abilities and weaknesses as the rest of her species.

Prior to the events of the series, Ignis worked her way up the ranks of Apollo's Army to the rank of Captain. In Chapter 11 she was promoted by Apollo to be his second in command. When his Acolytes learned of Apollo's death in the Epilogue, Ignis was promoted in his place as they believed this to be his will.

Ignis returned to Pyros prior to the events of From The Ashes as the ruler of the planet, to find an uprising faction called the Starlit Sky. They fought her when she arrived and forced her to take refuge in the Castle on the Invictus Flats. She was eventually overthrown by Ben Tennyson, who took mercy on her and helped her broadcast a surrender command to her troops before fleeing the planet. 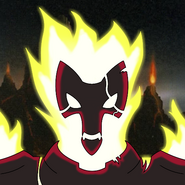 Ignis in From the Ashes
Community content is available under CC-BY-SA unless otherwise noted.
Advertisement