Hyperphysical Sapioids are Sideslash's species. They are believed to originate from the planet Object XX27-55 in the Triangulum Galaxy.

They are tall humanoid aliens with bizarre swirling faces. Each face has a number of eyes and spines, all angled against one another following the swirl. The highest recorded number of eyes is eight, and the highest number of spines is sixteen.

They have three fingers on each hand, and three toes on each foot- they stand on the front two and the third is a small hind toe.

It is entirely unclear how Hyperphysical Sapioid biology works. It appears to function flawlessly regardless of how much or little of it is within our dimensions.

Their main ability is the power to shuffle through a higher physical dimension beyond our three. They can do this at will and move any parts of their body through in part or in whole easily. They can also bring external objects or beings into said higher dimension, but they are not capable of functioning there.

They have incredibly fast reaction times and reflexes.

They are deceptively strong, and possess sharp claws.

This species is relatively fragile. As a result, they possess an overwhelming flight response when confronted by a threat.

They have no known technology, yet still somehow appear across the Triangulum Galaxy. They have also been recently sighted in Andromeda too. 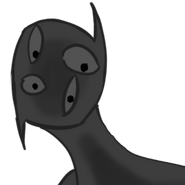 Intersect
Add an image to this gallery
Retrieved from "https://ben10fanfiction.fandom.com/wiki/Hyperphysical_Sapioid?oldid=867837"
Community content is available under CC-BY-SA unless otherwise noted.