Hydro-Tide is one of Joe's alien DNA samples that he can transform into when using the KeyTrix in The Hero Generation.

In The Hero Generation, Hydro-Tide has a single stripe running down his chest to his stomach. He also now wears a pair of black shorts. Also, his hands and arms are noticably larger than they used to be and are now connected to his body. Hydro-Tide has the KeyTrix symbol on his chest in The Hero Generation. In the new version, the symbol is shown to be in a hexagonal shape.

Hydro-Tide's main power is hydrokinesis- whether it be shooting it from his palms, or controlling it with telekenises. The tubes connecting his arms and torso together group water that is collected from the moisture in the air, then sending it through an internal tube within his arm, allowing him to spray streams of water from the palms of his hands. Hydro-Tide can as well breathe underwater, as gills will form on the side of his neck when exposed to the depths of water.

Appearances in The Hero Generation 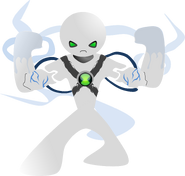 Hydro-Tide in The OmniHeroes!
Add an image to this gallery
Retrieved from "https://ben10fanfiction.fandom.com/wiki/Hydro-Tide?oldid=811100"
Community content is available under CC-BY-SA unless otherwise noted.