Hydro-Man is an alien transformation in the series, Brandon 10.

Hydro-Man has a humanoid appearance and resembles a brown old diver's suit. He has no visable eyes as his helmet overs his head. The helmet has a circular grill in its center at the front to provide sight. He has a bulky build and barnicle-like substances upon his shoulders. His hands seem to have black gloves as his feet are like armored boots. The Ultimatrix symbol is on his chest.

He has the ability to produce water from his hands with adjustable pressures from small water blasts to floods. He can also control water like stop it in mid-air or use it as water platforms. He can also breath and walk underwater and has Super Human strength as well as durability.

Hydro-Man can be quite slow in his suit of armor which makes him incapable of running quickly or jumping higher. He can also be pulled downwards by gravity more than lighter objects/people. As seen in James Saves the Day, Hydro-Man can be electrocuted which would weaken him severely.

In The Awakening, Hydro-Man battles against The Great One however he fails.

In Fame's Game, Hydro-Man defends guests from an attacking helicopter.

In Welcome to Atlantis, Hydro-Man battles Khan but is defeated.

In James Saves the Day, Hydro-Man was mind controlled into attacking James.

In Planet X, Hydro-Man helped put out a big fire.

In Greetings from Area 51, Hydro-Man used his water attack to short-circuit Ana's armor. 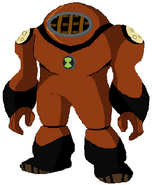 Hydro-Man Trading Card
Add an image to this gallery
Retrieved from "https://ben10fanfiction.fandom.com/wiki/Hydro-Man?oldid=865673"
Community content is available under CC-BY-SA unless otherwise noted.