Humungousaur is the Infinity's DNA sample of a Vaxasaurian from the planet Terradino in Bryce Bowman: Origins.

Humungousaur is about 12 feet tall and can grow bigger at will, up to about 60 feet.

When he grows, his dinosaur features become more pronounced, growing Stegosaur-like plates on his back, a crest on his forehead, and spikes on his tail.

Also, on his shoulders three plates separate and grow, giving him a more ferocious look.

His arms do something similar.

His skin is hard, brown, and a sort of beige color and he has a somewhat humanoid body.

Humungousaur wears the Infinity appears on his chest.

The Infinity glows, as Bryce's veins in his arm swell around it. Then, whatever's inside them rushes up Bryce's arm, through his whole neck and all over his face. Bryce closes his eyes in pain, as his neck stretches. His muscles all over his body grow. His shoulders expand, his arms elongate, and his spine stretches. Bryce roars, then spins as his skin converts into tan scales. Humungousaur flexes his arms to the sides of his body, posing.

In The Father, the OmniDroid used Humungousaur to fight Big Chill, and was defeated by Shocksquatch.

Humungousaur was unlocked by Azmuth when he unlocked the second playlist for the Infinity.

In Midnight Prowl, Humungousaur was used to fight the Wolf, but he ran away before Humungousaur could beat him.

In Prisoners for Fun, Bryce used Humungousaur to defeat Kevin.

In Frankenstein's Experiment, Humungousaur was briefly used to clash fists with Dr. Viktor.

In A Day Just for You, Humungousaur fought a small squad of Esoterica at the very beginning of the episode.

In Monster of the Earth, Nemevoc used Humungousaur to fight Bryce as Darkflame.

In Nemesis Returns, Nemevoc used Humungousaur to attack a Forever Knight castle and attract the attention of Bryce, then used him later to fight Bryce as Equinox, evolving him into Ultimate Humungousaur.

Humungousaur possesses incredible strength. According to Eugene, Humungousaur is strong enough to lift a To'kustar.

He is able to throw an object to up to a high altitude, even into near-earth orbit.

He possesses a thick, armored hide, which has proven to be durable enough to withstand blaster fire and heavy impacts.

Humungousaur can do a shoulder charge and make shockwaves by slamming the ground.

Humungousaur has the power to increase his own body size and mass. He can grow up to 60 feet. His strength increases as he grows.

Humungousaur can generate his stegosauride features (plates and spikes on spine) without changing size.

Humungousaur is durable enough to survive in space for a few minutes.

Humungousaur is quite agile for his size.

Humungousaur has a powerful roar.

Humungousaur is very slow and can't fit into small spaces. He is extremely vulnerable to electricity, and his size makes him a very easy target for enemy attacks. 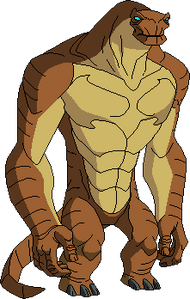 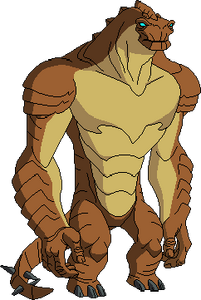 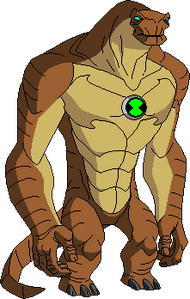 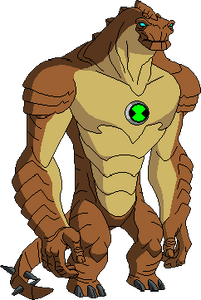 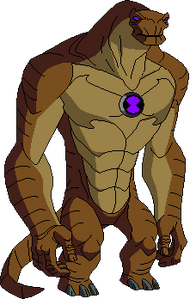