Humpbout bears huge resemblance to a humpback whale, except his body is more humanoid in some areas. He wears a black and white body suit, with the white part being at the bottom of his torso with 2 black rectangles and the black part, being at the upper half of his body, which then goes up to form a line at his forehead where the Atomnitrix symbol is placed. He has an under bite which gives him the major resemblance of a humpback whale. Humpbout has barnacle shaped bolts on his arms and legs which gives him most of his powers. He also has white eyes and a navy blue tone.

Humpbout has the ability to shoot water from his bolts and manipulate it. He is highly durable and can sustain heavy attacks. He also has the ability to crouch into ball form and roll. Even for his size, he is very strong and can lift several things larger than him.

Humpbout is amphibious and can survive and swim underwater.

Humpbout can survive in the vacuum of space.

Having rubbery skin, Humpbout is immune and resistant to all electrical attacks.

Humpbout is vulnerable to beings or objects that can drain him completely dry. 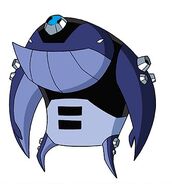 Humpbout's Old Image
Add an image to this gallery
Retrieved from "https://ben10fanfiction.fandom.com/wiki/Humpbout?oldid=894726"
Community content is available under CC-BY-SA unless otherwise noted.