Hivemind is a species unintentionally created within the Codon Stream, that does not exist outside of the T2 Omnitrix. They first appeared in Burning Bridges, the premiere episode of Ben 10: Road Trip.

Hivemind is a tall amorphous mass of sharp rock, more often than not appearing like a rock golem. In their usual form, they have no facial features, no digits, and no Omnitrix dial- with a dial-like pattern being embedded within its chest.

Hivemind's body is actually made up of thousands upon thousands of tiny insects, each equally sapient and acting as part of one single consciousness. Each has their own voice, but ultimately they submit to a single mind- Ben's. A side effect of this is that Hivemind speaks with no singular voice.

Due to being made out of a literal swarm of insects, Hivemind's form is not set. They can reconfigure how their Drones interact and interconnect in a large variety of ways in order to change their properties and powers. One of the first ways Ben learns to use this powers is with Density Manipulation, allowing them to alter Hivemind's durability, strength, and weight depending on what the situation calls for.

Hivemind's Drones can reproduce at an incredible rate, able to go from a single Drone to an entire body in only about an hour given enough biomass to use.

Hivemind can survive so long as a single Drone does.

Given the amount of minds at their disposal, Hivemind can think at incredible speed.

If their density is lowered far enough, they can fly in the form of a cloud-like swarm.

Hivemind possesses no natural instincts, having never evolved naturally. Due to this disconnect between Ben and the alien, he often compares using Hivemind to feeling like he is in a dream.

While in a state of low-density, Hivemind and their Drones are highly flammable.

Though not really a weakness per se, Hivemind cannot refer to themselves as a singular entity.

Hivemind is one of the ten aliens Ben receives with the T2 Omnitrix. They first appear briefly in Burning Bridges, where they tear through a chain link fence. They appear again in In The Shadow Of Vilgax, first while trying to study themselves they learn of Alien Data Packets left by Azmuth that punctuates just how unique Hivemind is as an entity and species. They are used later the same episode two defeat two Chimeran guards to the Capitol Building after Fanfare proved ineffective. He was used briefly in The Only Good Necroterran to help scout Anur G'rrnay.

Hivemind's DNA was collected by the Blacksmith after the events of Burning Bridges, which allowed the wielders of his Techtrix devices to transform into Hivemind in the episode Life On Earth. Hivemind is used once, at the start of the episode. It attacks Kai Green, who is rescued by Albedo disguised as Ben by using Doormensional disguised as 4D2. This Hivemind is defeated when Albedo turns into Haywire.

Hivemind's silhouette prior to his full reveal 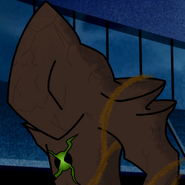 Hivemind in In The Shadow Of Vilgax