Hightide is the Omnitrix's DNA sample of a T'zun Army from the T'zeen Nebula in Earth-1010.

Hightide is, by default, a humanoid figure made of water. He has three fingers on each hand, and his feet form puddles with thin sea foam around them. The Omnitrix is located inside his translucent chest.

Dimension 23's Tidal Wave is aesthetically identical, save for the different trix and his blue eyes.

Hightide is made of water, and as such can shape-shift freely. He can increase his body mass significantly by absorbing more water from other sources. Hightide can also survive inside larger bodies of water, even if he cannot control all of it at once. He tends to appear as a cloud of sea foam like this.

He can freely manipulate water up two twice his current mass at any given point that is outside his body. He can pull this water towards himself to absorb it and increase his mass, or he can use it as a weapon. Naturally this ability is reliant on his environment.

He can project pressurised water blasts either from his mouth, hands, or feet. However, doing so diminishes his body mass, forcing him to find a new source of water to regenerate himself.

Uniquely for liquids and liquid-based aliens, Hightide can survive in the vacuum of space, providing it is warm enough that he does not freeze immediately.

Projecting water diminishes Hightide's body mass, making it a very finite attack. The attack weakens the less mass he has, and so does he.

He is vulnerable to being frozen, vastly slowing down his movement.

He can be evaporated by high temperatures, killing him if he is not careful.

Tidal Wave was used by Ben 23'000 in Trials by Fire: part 2 to force Omni Apollo to surrender.

Hightide was one of the original ten aliens in the T2 Omnitrix, and was first used by Ben Prime to avoid a fight with a group a Chimeran civilians. At news of a fire he immediately rushes to extinguish it before being forcefully reminded that water expands as it evaporates. He was used in Time Trials to rush Haywire and cause him to short circuit.

In Life On Mars, Hightide was used twice. The first time Ozai forced Ben to switch into Hightide because the Dead London creature was killing Geothermite, this caused Ben to snap at Ozai in anger. The second time was during the fight against Brave New World back on Earth. Ben used Hightide to take advantage of the fire hydrant he had ripped up and thrown at the creature, he jumped into the water stream and smashed the continuous torrent into Brave New World.

In Tides of War, Hightide was used alongside MindMatter, Powerhouse, and Triedge to help rescue and revitalise the T'zun Army political prisoner Marinium. 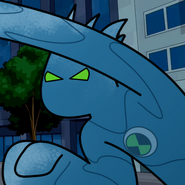 Hightide in Life On Mars