Hercules is the Infinity's DNA sample of a Tetramand from the planet Khoros in Bryce Bowman: Origins.

He has two sets of arms, the second resting right under the first.

Hercules is about fifteen feet tall.

Hercules wears gladiator-like armor, as his species is known to do. He wears black pants held up by a gold waistband. He also has an armor plate on his left shoulder that has two bone spikes on it. It's attached to a black band wrapped around his torso. He also wears black pants. Hercules has cloth wraps on his feet and the right wrist of his upper arms. On the opposite arm, he wears a gold wristband. Hercules wears a gold band around his right, upper bicep that also has bone spikes; three of them. He has black gloves on each hand.

Hercules has a series of tattoos. One on his right shoulder blade that stretches over his collarbone and onto his chest, another on his lower right arm, and one on his upper left arm.

Veins on Bryce's arm expand slightly and continue this way up his arm they reach his eye where the veins seemingly split his eye into two sharp, yellow eyes. Bryce sprouts two arms under his armpits and large spikes extend from the elbows on all four of them. He raises his head and it has become Hercules'. Hercules steps back and flexes while yelling as green light envelops the scene.

Hercules was unlocked in Agent's Assistants (Episode) when the Infinity scanned Manny.

In Friend of My Enemy, the Infinity transformed Bryce into Hercules to defeat Amsol.

In Ghostfreaked Out (BBO), Bryce used Hercules to fight Zs'Skayr as he possessed each of the Circus Freaks, Gwen, and Marissa. He surrendered when Zs'Skayr took over Marissa.

In The Knight's Challenge, Hercules was used in a duel against Enoch.

In Charmed, I'm Sure (BBO), Hercules was used in practice against Kevin Levin.

In The Darkest Night: Part One, Hercules failed to defeat Death Dragon.

Hercules' most prominent ability is his enhanced strength, being able to lift several times his own weight and punch through various resilient materials with ease. His strength allows him to use anything heavy as a weapon, from big rocks he can throw several feet away, to beams and pillars that can be used as clubs.

Hercules can create strong shockwaves by clapping all four of his hands together or slamming his fists on the ground.

Hercules can jump several times his own height.

Hercules has high durability, being almost fire and laser-proof.

By punching the ground, Hercules can launch rocks in all directions. By clapping all his hands together, Hercules can fire a sort of seismic beam.

Sometimes Hercules' bulk is a disadvantage; all the extra muscle mass makes him relatively slow, and his size, likewise, makes using things designed for smaller species difficult. His immense size also makes him an easy target to shoot.

When under the effects of a cold, Hercules' strength and stamina are greatly decreased, his skin turns from red to an orange shade and he develops pungent hives in his armpits. 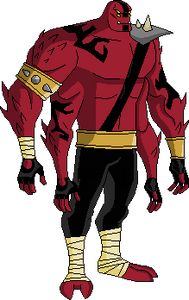 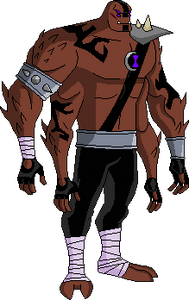 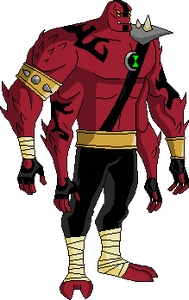 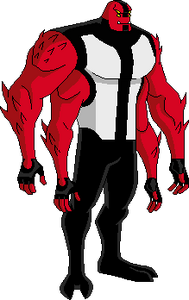