Start a Wiki
Herculian, AKA Herc, is the main character of Herc the Merc.

You may be looking for Herculian, his counterpart from Not Applicable.

Herc was born on an unnamed planet, and after 15 years, he left his planet to become a mercenary. He decided to capture the Ultimatrix, but instead accidentally stranded himself on Earth and joined a local high school in an attempt to blend in. Unfortunately for him, he doesn't seem to do this too well.

Being a Grikonian, Herc's abilities include:

Herculian is a blue, humanoid alien with orange eyes, somewhat lanky limbs, and a blocky body.

Herc is only able to mimic machine-based abilities, so if he shapeshifts into a species with different powers, he'll be unable to copy their abilities.

Herc is arrogant, and believes himself to be better at things than he actually is. He considers his abilities to make him the ultimate mercenary, in spite of his lack of any proper training. Despite (or perhaps because of) this arrogance, Herc is very moralistic﻿﻿; unfortunately for those around him, he operates on a literally alien morality, and is rather unpredictable. 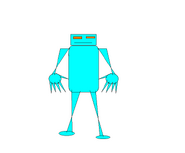 Herc's Renovated Appearance drawn by Rob
Add an image to this gallery
Retrieved from "https://ben10fanfiction.fandom.com/wiki/Herc?oldid=808195"
Community content is available under CC-BY-SA unless otherwise noted.