Helen Wheels is a Human/Kineceleran hybrid from Earth in Bryce Bowman: Origins.

She looks like a regular Kineceleran with three fingers instead of claws and green eyes. She wears a black-green colored outfit.

Helen is smart, brave, kind, nifty, and level-headed, though at times she usually tries to act rational and wise, making her mostly a mirror image of Gwen Tennyson, as well as sister figure for Manny Armstrong.

Helen shares a love-hate relationship with Manny. While Manny is usually hot-headed, aggressive and enjoys using violent methods, Helen is usually more careful and less aggressive, causing occasional arguments. On the other hand, she stated that they worked better teaming together than with other Plumbers, and shows true concern when seeing him injured or in danger.

Helen first appeared in Agent's Assistants (Episode), where she helped defeat a band of Esoterica.

In The Darkest Night: Part One, Helen appeared briefly before the ed of the episode. 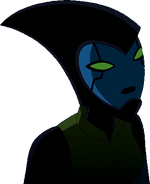