Ben 10 Fan Fiction Wiki
Register
Don't have an account?
Sign In
Advertisement
in: UltiVerse, Aliens, Ben 10: Protector of the Omniverse,
and 10 more

Heavysplitter is the Infinimatrix's DNA sample of an Ekoplektoid from the planet Ekoplekton in Ben 10: Protector of the Omniverse. He is the Timeline 1 equivalent of the canon Slapback.

Heavysplitter has Slapback's reboot appearance, but the blue parts on his outfit are green. His outfit also has short sleeves. The Infinimatrix symbol is on his chest and is recolored black and green. His colors match the color palette of Heroes United.

As the transformation track begins playing, Ben hovers in a dark green background with light green bubbles pulsating rapidly behind him.

Heavysplitter is capable of duplicating himself to an unknown degree when his back is struck. This can also be accomplished whenever Heavysplitter applies sufficient pressure on his own back.

The clones are not linked in any way and can act independently from one another.

Each time he duplicates, the resulting Heavysplitter clones become smaller and stronger by a proportionate amount. It is possible for Heavysplitter to duplicate enough to become as dense as a black hole.

Heavysplitter's clones get more durable the more they multiply.

Heavysplitter is heat resistant and is immune to lava. His clones are able to float on lava.

Heavysplitter seems unable to control his duplicating power, as each strike on his back forces him to duplicate unwillingly.

In his base form, Heavysplitter cannot reach his own back if his arms are in a certain gesture. Therefore he is required to seek help from others when trying to activate his duplication powers.

The combined weight and mass of each set of Heavysplitter clones may cause issues to his surroundings. This limits how many he can reasonably make but at the same time reducing the risk of copies being harmed.

Since each of the clones have their own sense of individuality, Heavysplitter can end up fighting himself if incensed.

His name is a portmanteau of the words 'heavy-hitter' and 'split', referencing his density amplification and self-duplication powers respectively. 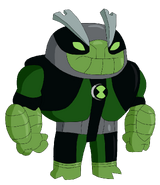