Heatblast is the Infinity's DNA sample of a Pyronite from the planet Pyros in Bryce Bowman: Origins.

Heatblast is a magma-based lifeform whose body is composed of a bright inner magma body covered by a dark red or brown rocks.

As a fire-based entity, his body radiates high amounts of heat.

His feet has a slight oval-like design with only two toes and one back toe.

Heatblast's tongue is made of fire.

Heatblast has two volcanoes that spurt fire out of them consistently.

The Infinity appears on his chest, slightly offset from the center by resting on one of his plates of armor.

Dark-red rocks start growing on Bryce's arm near the Infinity as it glows. The rocks quickly travel upward and encompass his head. A line tears through red armor and rockets up and erupts in a geyser of fire around Heatblast's head and from his shoulders. Heatblast throws his arms in front of his chest before jerking them back into a fighting position as he is engulfed in green light.

In The Black Scythe Heatblast was killed by Black Scythe, after having fought him for a long time.

In Nemesis' Revenge, Nemevoc used Heatblast defeated all the Freelancers, aside from Bowman.

Heatblast has the ability to generate and manipulate intense heat and fire from his body. He can form fire into any shape that he chooses, commonly fireballs. He can enhance the fire in his hands for flaming punches.

Heatblast's fire can become hot enough to melt a tank in, melt a road.

Heatblast can make his flames explosive, explaining why his fire tended to cause explosions on a regular basis.

Heatblast can create a small fire board on which he can ride at high speeds by launching fire backwards like an engine. On this board, he has enough skill to ride in a continuous circle.

When infected with a cold virus, Heatblast's powers are reversed, his pyrokinesis becoming cryokinesis, and him being constructed of icy fire rather than regular fire.

Heatblast has enhanced strength and durability.

Heatblast can swim and use his powers underwater, but with a very low intensity.

If exposed to enough water or fire extinguishing substance, Heatblast's fire will be extinguished, and will take a considerable long time to heat up and use his fire abilities properly again.

When under the effects of a cold, Heatblast's body and flames turn to blue and give him cryokinesis (ability to create and control ice). Despite these new powers, Heatblast works completely "unfunctional" to his fiery nature and the cold still prejudiced his health, so it's still technically a "weakness", albeit Heatblast made excellent use of this newfound power in that episode.

Heatblast's fire attacks are useless against his natural predator, Crabdozer. 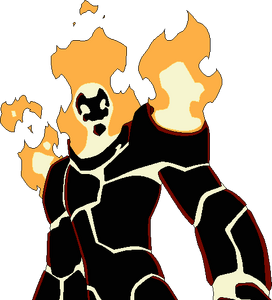 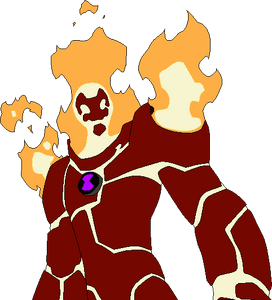 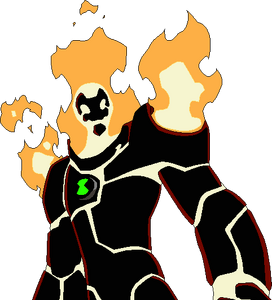 Heatblast in Devil's Bounty
Add an image to this gallery

Retrieved from "https://ben10fanfiction.fandom.com/wiki/Heatblast_(Earth-90)?oldid=884304"
Community content is available under CC-BY-SA unless otherwise noted.