Hat Slapback is the Hat Form of Slapback in Ben 10: Stupidity Force: End Of Omnivangelion: Future. He is the first new Hat Form in the series.

Hat Slapback appears identical to Slapback, except he wears a hat, which can be any hat. When Muslim Ben uses Hat Slapback, he wears a taqiyah, while Crazy Ben will use Hatty's top hat.

Hat Slapback possesses all of Slapback's powers, mainly his self-duplication when his back is hit.

Hat Slapback's hat can move freely across Slapback, allowing it to slide down his back and slap him on the back to trigger his self-duplication easily even when he is a single Slapback.

His hat can also stretch backwards, allowing it to launch Hat Slapback's generated duplicates as projectiles. The newly Hat Slapbacks also possess hats of themselves, allowing them to repeat the same process, which can prove to be deadly as they grow in weight and mass.

The Hat can also hover in mid-air, grabbing Slapback along with it, allowing for Slapback to hover as well or launch his copies from the air.

If his hat is stolen or ruined, his Hat abilities cannot be triggered, which can be problematic, especially as a single Slapback. 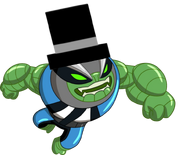