Hackoid is an alien transformation in Brandon 10.

In Aliens Among Us, Hackoid is a green and black colored humanoid. He has wings on his back, two eyes and a second pair of arms on his side. Hackoid also has a circuit board design.

In Ultimate Hero,  Hackoid remains as a humanoid figure with a color pattern of green and black. He has green circuit patterns on his chest, arms, legs and stomach. His wings are a light green variation and are also rectangular. His lower set of arms are now retractable which affects his appearance slightly. Hackoid also has overlapping, grey shoulder pads of some sorts and, now, has two pairs of rectangular, green eyes. There is a black stripe coming from his leggings. His feet have two toes and a darker shade of black and grey while his face is a light grey. The Ultimatrix symbol is on his chest seemingly connected to the circuit patterns on his chest as well.

Hackoid has the ability to hack into computers, devices, machines and nearly any type of machinery and technology. He can also fly.

As seen in Playtime, Hackoid has an ability to not be detected by sensors and scanners which makes him technically invisible to technology. He can also disable technology with physic connections to objects.

Hackoid can also create a charged EMP attack to disable machines as seen in Welcome to Atlantis.

Hackoid is affected greatly by water. Also, as seen in Aliens Among Us, Hackoid was doomed to falling under the control of Lord Abraxo and very nearly close to killing him which would've made him into a sentient monster; however this only happens under a high telepathic (Lycosidian) force and when the Omnitrix's safe guard is disabled, weakened or not-strong-enough to handle an even larger force. 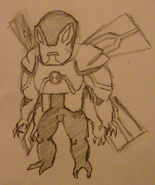 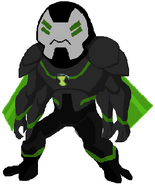 Hackoid Trading Card
Add an image to this gallery
Retrieved from "https://ben10fanfiction.fandom.com/wiki/Hackoid?oldid=865601"
Community content is available under CC-BY-SA unless otherwise noted.