Gwendolyn "Gwen" Tennyson is a Human/Anodite hybrid Plumber, the paternal first-cousin of Ben Tennyson, and (along with Kevin Levin) a front-line member of his team. Gwen was first introduced when her parents send her on a summer-long road trip with her Grandpa Max and her cousin Ben. She has, as Verdona refers to it, "The Spark".

Her naive nature is toned down in Alien Force; she is now even more analytical. It is highly unlikely that she will get stupefied; she is also a quick thinker and an instinctive person. But at times she trusts others too quickly, and that may disadvantage her or even injure her, like in Too Hot To Handle. She can handle things well despite the conditions (such as when her magical powers were drained and Charmcaster hit her with a bolt of magical energy and she immediately reversed the spell though she had no magical, mystic power left yet she could hold herself). Gwen is at times shown to be very concerned with things such as her surroundings, the people around her and the ones who she cares about. She is very strong (physically and mentally) and well mannered, despite her inflating sarcasm and ego at certain times. Gwen is a very caring, compassionate person such as shown from her acceptance of Kevin's past and recent action, also saying she does not care about Kevin's appearance. In episode It's Not Easy Being Gwen, it shows that Gwen takes her education very seriously. Showing to come home late at all hours of the morning and having to wake up at 5:30am in the morning. When waking up so early she does a number of things before going to school. Such as jogging, practice french, school, and afterschool karate classes. Its also presumed that Gwen goes to private school since it shown that her usual clothing are actually a uniform at her school. 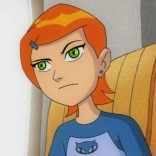 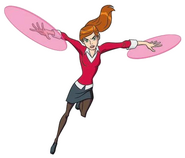 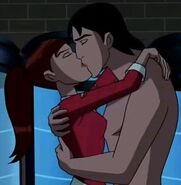 Gwen & Kevin are kissing
Add an image to this gallery
Retrieved from "https://ben10fanfiction.fandom.com/wiki/Gwen_Tennyson_(A90_Timeline)?oldid=737882"
Community content is available under CC-BY-SA unless otherwise noted.