Ben 10 Fan Fiction Wiki
Register
Don't have an account?
Sign In
Advertisement
in: UltiVerse, Aliens, Ben 10: Protector of the Omniverse,
and 10 more

Gutrot is the Infinimatrix's DNA sample of an unknown species from an unknown planet in Ben 10: Protector of the Omniverse. He is the Timeline 1 equivalent of the canon Gutrot.

Gutrot has his Omniverse appearance, but his gloves and boots are black. The Infinimatrix symbol is on his chest and is circular instead of hexagonal. Where the Infinimatrix should be placed is replaced with a nozzle. His colors match the color palette of Heroes United.

As the transformation track begins playing, Ben hovers in a dark green background with light green bubbles pulsating rapidly behind him and crouches. Ben's skeletal structure increases as his head grows wider and shorter, losing hair and turning light purple. His ring and pinky fingers merge into one and black gloves cover his hands. His shoulders turn light purple as a green outfit covers his entire body save for his stomach, which is covered with glass. Circular nozzles grow on his arms, shoulders and head. The Infinimatrix symbol pops out of his chest. Gutrot cracks his knuckles as gas swirls around in his stomach, completing the transformation.

Gutrot has the ability to make compounds of almost any type and expel them as gas from the various nozzles on his body for both offense and defense. The strength of these gases depends on the amount expelled and their chemical makeup.

Some of the gases Gutrot can produce include:

Gutrot has very advanced knowledge of chemistry, as well as some degree of knowledge on a species' biology. This allows him to create a gas that can specifically target the species in question.

Gutrot can absorb gas by pulling it through his nozzles.

If Gutrot creates a gas inside his body, then discovers he no longer needs it, he can simply "neutralize" it instead of releasing it.

Gutrot's intelligence seems to be innate since he may not fully understand what he is talking about from his point of view, similar to some of Ben's other intelligent aliens. Furthermore, Gutrot seems to be very intelligent in general.

Gutrot is immune to poisonous and acidic gases, as he can inhale them and break them down into something harmless. He is also immune to a Nemuina's sleep dust.

When Gutrot uses his gases, they make a large cloud, which is susceptible to prevailing winds. This can endanger allies, as well as innocent bystanders.

Some of Gutrot's gases are flammable, so he must be careful in situations that might ignite them.

Creatures who are shielded from gases, such as those with a gas mask or insulation, are immune to Gutrot's gases.

Like any other organic being, Gutrot is vulnerable to being erased from existence by a Chronosapien Time Bomb. 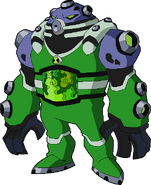