Gun Ceann is a minor character in Tech Cross. She was the genetic donor for Dullacannon.

In her natural form, Gun Ceann has the ability to literally launch her head off of her neck like a cannonball. The head's "hat" is actually hardened horn material capable of bashing through solid rock.

Once launched, her head can sprout an extendable spine growing up to 50 feet in length that allows it to move like a snake, reattach itself to the body from a distance, or even be wielded like a flail.

The head and the body have separate brains, each of which is fairly intelligent on their own, but when the head is attached to the body, the brains work in sync to make her an unmatched battle strategist. 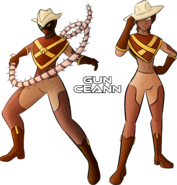 Retrieved from "https://ben10fanfiction.fandom.com/wiki/Gun_Ceann?oldid=876979"
Community content is available under CC-BY-SA unless otherwise noted.