Growler appears to be a large brown dog with yellow eyes and teeth and claws.

In the original series Growler wears the Omnitrix symbol where his nose should be, and black and white armor over both his front arms.

In Alien Force and Ultimate Alien Growler loses the black and white armor on his arms and instead reveals the natural armor is colored a darker brown. His Omnitrix symbol is on his chest.

His ultimate form turns him from a light beige to a dark blue. More sharp spikes and hairs are protruded from his back and arms, and several more pieces of armor are around his legs and tail. Around his face are beige freckles. 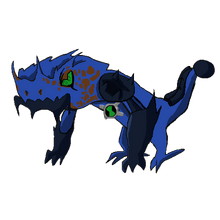 Growler has superhuman strength, as he can rip off the roof of a car with ease. Growler can dig deep craters at a fast speed, even while digging through solid stone ground.

Growler has enhanced agility that allows him to run at an inhuman rate.

Growler has enhanced durability due to his armored skin.

Growler is a quadruped, however he is capable of standing on his hind legs, and he can punch, somewhat awkwardly, by doing this.

Because of his heavily armored skin, his agility is only limited to his speed. He is not very flexible in that he is unable to jump from tree to tree like Volpimancers can.