Green Thumb is a Martian from Mars, and one of Evan's aliens from Evan Billion.

Green Thumb looks like a light green man with four fingers and a dark green suit. He has a giant round head, two big black eyes, a tiny nose, and no mouth.

Green Thumb is a Martian, the most common kind of alien, letting him have technokinesis. He can control technology from great distances, and can combine technology he controls to create greater technology.

Like other Martians, Green Thumb can shapeshift into different things. Unlike other shapeshifters, he gains the powers of the things he turns into.

Green Thumb can melt into a pile of goo. By melting just his hands, Green Thumb gains the ability to pick locks, like Goop.

Although Evan has not mastered these, Green Thumb also wields telekinesis and telepathy. Evan has, however, developed the telekinetic ability to fly.

Green Thumb is very weak to fire. If looking at Green Thumb through blue glasses, one can see through Green Thumb's shapeshifting and look at his real form. 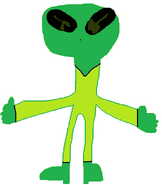 Green Thumb in the title card of his debut episode