Greasemonkey is a Hexatrix alien in Simien 10: Blood Monkey.

Greasemonkey is a black-furred humanoid monkey. He stands at about average human height.

At the tips of Greasemonkey's fingers, toes and tail are golden sockets similar to Feedback's, which store wires within them. His eyes are yellow.

Greasemonkey can insert any of his sockets into almost any type of machinery, ranging from simple motor engines to high-tech alien technology or even mechanical beings such as Galvanic Mechamorphs or Troconneuse. While connected to such machinery, Greasemonkey can fully control their actions, download any type of data off them, or short-circuit them to prevent them from working again.

Greasemonkey can understand or build mechanical devices much faster than most species due to his mechanical knowledge.

Greasemonkey can connect his sockets to non-mechanical materials as well, allowing him to emit a powerful electric burst which can spread across the object connected to.

Unlike most electrokinetic aliens, Greasemonkey cannot use his electric abilities from range, and must connect to an enemy with his sockets/wires to shock.

Greasemonkey's metal sockets can be electrocuted to hurt him significantly.

Extremely high-tech machines or robotic species can resist Greasemonkey's control and potentially use it against him. 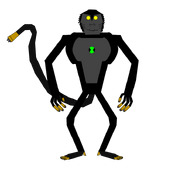