Graviton is the Infinity's DNA sample of Galilean from Keplorr in Bryce Bowman: Origins.

Graviton is literally a living planet.

He is a large, bulky, reddish-brown alien with rocky skin, a giant mouth and a molten lava planet core at the center of his body.

His feet are tan with three toes.

He has three fingers and one thumb on each hand.

He wears black shorts with grey stripes and a silver belt.

The Infinity symbol appears on his forehead.

Red and brown rocks form around the Infinity on Bowman's arm. He spins around while the rock spreads over his hunching body. His head merges with his chest, then he is almost entirely consumed by rocks. The sphere of red and brown rock sprouts arms and short legs, then a face appears on its chest. Graviton poses with his arms flexed.

Graviton first appeared in "Monster of the Earth", bein used by John Spacewalker, though he call him "Gravattack".

Graviton can control gravity to manipulate the weight of objects, motion of objects, or slam them down to the ground with ease.

Graviton can make matter or energy orbit around him whenever he retracts his limbs, giving himself the appearance of a planetoid sphere.

Graviton can manipulate his own gravity in order to levitate.

Graviton can survive in a vacuum.

If he takes large amounts of damage to his core, Graviton could meltdown and explode, much like an actual planet.

Sudden changes of mass can throw off Graviton's orbit.

Graviton can not stop someone from using energy-based attacks. 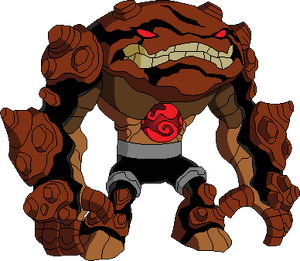 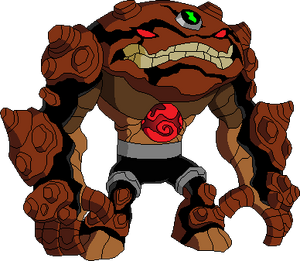 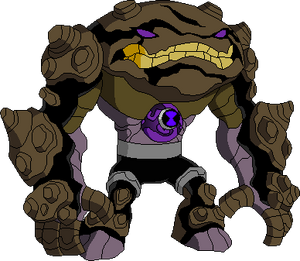 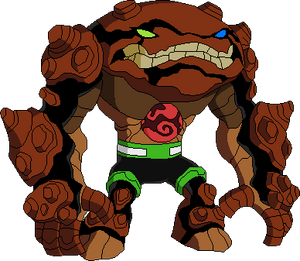 John Spacewalker as "Gravattack" in Monster of the Earth