Ben 10 Fan Fiction Wiki
Register
Don't have an account?
Sign In
Advertisement
in: UltiVerse, Aliens, Ben 10: Protector of the Omniverse,
and 16 more

Gravattack is the Infinimatrix's DNA sample of a Galilean from the planet Keplorr in Ben 10: Protector of the Omniverse. He is the Timeline 1 equivalent of the canon Gravattack.

Gravattack has his Omniverse appearance, but he has many more rocks on his body of different sizes, and his body overall is more detailed, having cracks and dents in different places. The Infinimatrix symbol is on his waist. His colors match the color palette of Heroes United.

As the transformation track begins playing, Ben hovers in a dark green background with light green bubbles pulsating rapidly behind him and crouches.

Gravattack can control gravity to manipulate the weight and motion of objects, allowing him to suspend and levitate targets in the air, send them flying back or forth, or slam them down to the ground with hand gestures. His control over gravity allows him to change its direction, allowing him to telekinetically send targets flying upwards or across the air as if they were falling.

Gravattack can place objects into an orbital track, causing them to fly in circles at various speeds. When using his powers, he emits an aura of hazy energy which he can also form into walls, barriers and domes.

Gravattack can use the laws of general relativity to his advantage and can reduce the speed of objects (or in some cases, creatures) to nothing even if they were moving at the speed of light before.

Gravattack can make matter or energy orbit around him whenever he manipulates his own gravity in order to levitate and retracts his limbs, curling his body to a planetoid sphere.

Gravattack possesses enhanced strength, enough to punch a hole in the ground.

Because he is a living planetoid, Gravattack can survive in the vacuum of space.

With enough practice, Gravattack can create a Quasar.

If he takes large amounts of damage to his core, it can cause Gravattack immense pain. This will also make him to enter meltdown and explode, which can be dangerous enough to destroy the whole area he is in.

Gravattack's large body makes it hard for him to move in small spaces.

Sudden changes of mass can throw off Gravattack's orbit.

If Gravattack manipulates the gravity of an opponent or object too much, he can accidentally create a black hole and will be unable to undo this despite his impressive ability to create it in the first place. There is also a structural limit that Gravattack's target reaches long before the fusion starts. 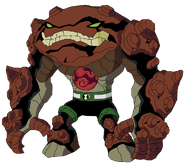 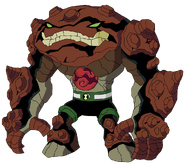 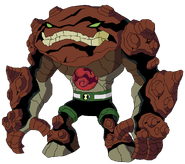 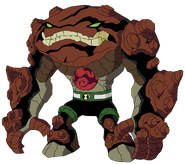 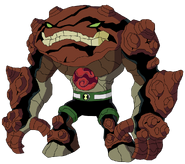