Gravattack is the Omnitrix's DNA sample of a Galilean from the planet Keplorr in Earth-1010.

His evolved form is Ultimate Gravattack.

Gravattack is, quite literally, a walking talking planet. He is large and bulky, made of brown and black rock and has a red molten core in the center of his body. He is about twice Ben's height. He has three fingers and a thumb on each hand, and tan toes on his feet. He wears black shorts and a green belt with white stripes. The omnitrix symbol appears on his forehead.

In Ultimate Ben's timeline, Gravattack's omnitrix symbol is on his waist. He does not wear any clothing.

Gravattack's most unique ability is his ability to control gravity. He can manipulate how gravity effects things, or generate his own. He can use this to lift and move objects with ease.

Gravattack has a planetoid form, which he achieves by retracting his limbs into his body. This allows him to put objects into orbit around himself, as well as levitate.

He does not need to be in his planetoid form to levitate, however it is more taxing on his abilities.

Even without making use of his abilities, he has enhanced strength and durability.

Being a living planet, he can survive in space easily. He can also use his gravity powers to propel himself through space.

Much like an actual planet, if his core is critically damaged he could meltdown and explode.

Gravattack's large stature makes it hard for him to fit into tight spaces.

Sudden changes in a target's mass can throw off Gravattack's orbit.

Omni Apollo used Planetoid (His Galilean form) to fight Ben 23'000 in Trials by Fire: Part 2. He defeated Muck-A-Muck, but was himself defeated by Rollaway. 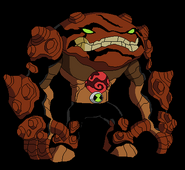 Retrieved from "https://ben10fanfiction.fandom.com/wiki/Gravattack_(Earth-1010)?oldid=861679"
Community content is available under CC-BY-SA unless otherwise noted.