Goop is the Infinity's DNA sample of a Polymorph from the planet Viscosia in Bryce Bowman: Origins.

Goop is a humanoid pile of goo that can take any shape at will.

Goop has Anti-Gravity microchips that allow him to maintain any shape at will. These microchips are- you guessed it- microscopic, so it appears as if Goop flies around on his own. The Infinity creates them to make Goop usable.

When the Infinity appears, it's usually submerged within Goop's body, and around his chest.

The Infinity pulses with powerful energy, enough so that Bryce holds his arm away from his face. His arm begins slowly melting, starting from his arm. He quickly flops into a green puddle on the ground, which suddenly springs to life and reshapes itself into Goop, who poses with one arm all the way outstretched and the other just in front of his chest.

In Change of Plans, Goop easily defeated Hex by seemingly drowning him.

In Sarcophagus, Goop was used, briefly, to save York from being run over.

Goop is indestructible, making it difficult to defeat him by attacking his body.

Goop is capable of throwing blobs of goo and spraying acid from his hands.

Goop is able to eject slime with acidic or sticky properties.

Goop is able to dissolve a large variety of materials.

Goop can stretch himself.

Goop can regenerate himself.

Goop can be hurt by being spun really fast in a centrifuge, which causes him to begin separating into his constituent compounds. 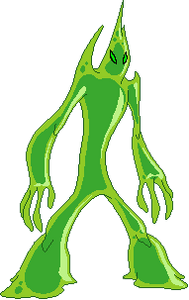 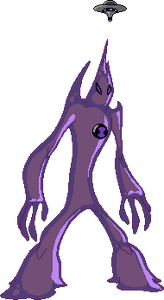 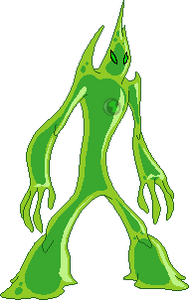