The Gyroscopic Operated Kinetic Acceleration Racing Transport, better known as the Go-Kart, is a vehicle used in the series, Brandon 10.

The Go-Kart appears as a more advanced and fortified version of a regular, green and black Go-Kart. In fact, it can almost be mistaken for a car if not for its small size and obvious Go-Kart features. The interior of the Go-Kart is simply a small space with a seat. There's also the technical dashboard with a screen, some controls, switches and a port for the Omnitrix whenever Overdrive Protocol is activated.

In order to compete in a race so that he can stop the Extreme Bikers from winning a potentially powerful weapon, Brandon had constructed the Go-Kart with the aid of Computer. It's implied that this had taken a couple of days to build. On the day of the race, Brandon had arrived on the track in the Go-Kart and proceeded to compete in the race against his opponents. The Go-Kart was subjected to a variety of obstacles and challenges provided by the Extreme Bikers and the other racers. At one point in the race, the Go-Kart was forced off the track and damaged. Brandon then used parts from damaged vehicles and robotic racer debris to repair the Go-Kart and modify it. While the modifications didn't last all too long, they did give the Go-Kart a chance to stay in the race and win. Brandon also assisted in protecting and even carrying the Go-Kart by using his alien transformations. With both racers were close to the finish line, Brandon activated the Overdrive Protocol which allowed the vehicle to take on Freezefire's DNA. This granted them enough of a boost and advantage over the Extreme Bikers to win the race. However, at the end of the race, the Go-Kart was immensely damaged and required serious repair.

Being a vehicle, the Go-Kart has the capability to drive around and provide its user with a means of transportation. Asides from that, the Go-Kart also comes equiped with some advanced features as well. One of them is a screen that allows Computer to connect to, where it can interact with the driver. As the full name entails, the Go-Kart is operated by gyroscopes planted at the base. In other words, the gyroscopes help balance out of the Go-Kart so that it can't tip over or become unbalanced unless hit by a excessive and continous force. There's also the Overdrive Protocol, a program installed into the Go-Kart that allows the user to connect their Omnitrix within the port built into the dashboard. Once they do that, the program takes the DNA of the selected alien transformation and applies it to the Go-Kart, itself, granting it with abilities similar to the chosen alien. This, however, is only powered by the charge of the Omnitrix. The longer the charge, the longer the transformation will last. Although, whether the charge is high or low, the transformation itself will only last for a limited amount of time before the Go-Kart returns to its default state. 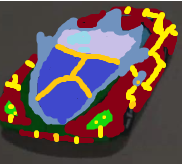 The Go-Kart utilizing Freezefire's DNA
Add an image to this gallery
Retrieved from "https://ben10fanfiction.fandom.com/wiki/Go-Kart?oldid=834753"
Community content is available under CC-BY-SA unless otherwise noted.