Ghostwork is a fusion of Ghostfreak and Clockwork created by CaT.

This fusion is free for anyone to use.

Ghostwork's body shape resembles Clockwork's for the most part, with detailing matching that of Ghostfreak. The Omnitrix/Biomnitrix/Whatever symbol is on his chest.

Ghostwork is unable to remove his skin/armor, making him unable to use the full potential of his Ghostfreak abilities, and is unable to possess people. In addition, his time beams are much less powerful than Clockwork's unless their power is channeled through his tentacles.

If you decide to use Ghostwork, make sure to list his appearance here. 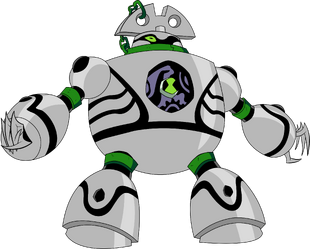 Ghostwork (Gray Color Variant)
Add an image to this gallery

Retrieved from "https://ben10fanfiction.fandom.com/wiki/Ghostwork?oldid=828396"
Community content is available under CC-BY-SA unless otherwise noted.