Ghostfreak is a phantom/ghost-like alien with a gaseous appearance and claw like hands. He has black skin with green lines running all over him. His skin is removable and he has tentacles underneath it. If his skin gets ripped off, his true form will unveil. He could deform his shape to appear like wisps of grey, somewhat transparent flame.

Ghostfreak looks like Zs'Skayr, his eye is green and the Ultimatrix MK10 symbol is on his chest. His voice is considerably deeper and raspy.

He looks the same, except he has black lines and grey skin.

His green lines are now red, along with his eye and ultimatrix symbol.

Ghostfreak's are composed of several aspects of traditional ghosts from myths and lore, such as hovering and phasing through solid matter, making his intangibility a powerful defense as well as a means of infiltrating high-security locations. He has been shown to be capable of making other objects or people intangible and transparent as well through physical contact. Also, he can phase parts of himself through people to cause them pain or to shock them into submission, with it also being shown that he can make people feel deathly cold by moving through them.

Ghostfreak can fly, has a movable eye, can become invisible, and can survive in space. Ghostfreak is able to possess the bodies of his enemies and control their movements, to the point where he can cause them to fly like himself, allowing him to freely slam them against walls or hit themselves. He can also access the abilities of other beings that possess super. In the case of Darkstar, he also had access to his once he possessed him.

As show in Ghostfreaked Out, Ghostfreak can stick his claws into his head and sting them, as shown with Thumbskull.

Ghostfreak can use the tentacles under his protective skin as a means of scaring his enemies into submission. However, Ghostfreak has also been seen using them to grab heavy objects, such as a bus full of people. The tentacles also appear to be resistant towards sunlight.

Ghostfreak's true form, without his protective skin, has telekinetic abilities, as seen in Ghost Town, when he fought against Vilgax using only his telekinetic abilities and energy beam projection. His true form also has sharp teeth and claws, as well as an inverted skull. His outer skin protects him from burning in the sunlight.

Ghostfreak is immune to Darkstar's energy absorption ability, as an Ectonurite has no life force in the conventional sense.

Ghostfreak can rotate his skull.

Ghostfreak's tentacles are strong enough to lift a bus full of people, as revealed in Bengeance Is Mine.

Ghostfreak can alter his shape and deform like gas by making himself into a smoke like wispy form, first shown in Hunted.

As shown in Mystery, Incorporeal, it is revealed that Ghostfreak, and other Ectonurites, don't have mana in them (as mana is life energy, and Ectonurites are not alive in the same way that most life forms are).

Ghostfreak's second skin inhibits many of his , but removing it makes him vulnerable to sunlight.

Though he is able to fly, he is not very fast in the air, and therefore must rely on his intangibility and invisibility to evade attacks.

In the original series, Ghostfreak's DNA was linked to the conscious, memories, and personality of Zs'Skayr, who took over Ben and freed himself after the Omnitrix timed out, making Ghostfreak a alien to use. However, Ghostfreak now exists independently from Zs'Skayr, complete with Ben's personality, so this is no longer an issue.

His intangibility is useless when faced by another being that can go intangible.

Ghostfreak cannot possess beings who have no mind, like a zombie for example. 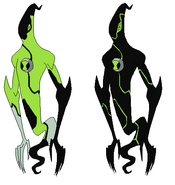 Albedo as Ghostfreak
Add an image to this gallery
Retrieved from "https://ben10fanfiction.fandom.com/wiki/Ghostfreak_(TNO)?oldid=870692"
Community content is available under CC-BY-SA unless otherwise noted.