Ghostfreak is the Infinity's DNA sample of an Ectonurite from the planet Anur Phaetos in Bryce Bowman: Origins.

He has grey skin with black lines running all over it. This skin is removable and he has tentacles underneath it.

If his skin gets ripped off, his true form will unveil.

He has one large, red eye and his ghost-like "tail" has black stripes on it, similar to his tentacles. The Infinity appears on the left side of his body,peeking out from under his skin.

In his true form, Ghostfreak looks identicle to Zs'Skayr, aside from his eye, which retains its red coloring.

While the Infinity glows green, a grey skin creeps from the light and covers Bryce's arm. The skin continues until it comes to Bryce's head where it covers his terrified eyes. A black line slices across Bryce's skin-covered chest and spreads out all over his body. The line slashes over Bryce's face, and a red eye sprouts from inside and expands to full size. Ghostfreak hovers with his claws out as he is consumed in green light.

In Secrets: Part 2, Ghostfreak was unlocked by Azmuth when he unlocked the second playlist in the Infinity.

In Where the Magic Happens (BBO), Ghostfreak fought Hex but was defeated when Hex trapped him in a red sphere of unknown energy. The Infinity timed out shortly after that.

In Nemesis Attacks, Ghostfreak battled against Kraab until he was covered in a goo that made him possible to hit at all times. He then switched into Water Hazard to beat him.

In Last Laugh (BBO), Ghostfreak was used in a fit of rage against Zombozo where he literally scared him to "death".

In Monster of the Earth, Ghostfreak was used by Nemevoc to escape from Bryce and John.

In Friend of My Enemy, Ghostfreak failed to trap a squad of Esoterica.

In Ghostfreaked Out (BBO), Ghostfreak was used to defeat the Circus Freaks, and then later released from the Infinity.

In The Black Scythe, Ghostfreak defeated a large group of Esoterica by ripping his second skin off and becoming his true form.

In Metamorphosis (BBO), Ghostfreak used his true form to fight The Meta.

Ghostfreak's powers are composed of several aspects of traditional ghosts from myths and lore, such as hovering and phasing through solid matter, making his intangibility a powerful defense as well as a means of infiltrating high-security locations. He has been shown to be capable of making other objects or people intangible as well through physical contact.

Ghostfreak can fly, has a movable eye, can become invisible, and can survive in space.

Ghostfreak can use the tentacles under his protective skin as a means of scaring his enemies into submission. However, Ghostfreak has also been seen using them to grab heavy objects, such as a bus full of people. The tentacles also appear to be resistant towards sunlight.

Ghostfreak is immune to energy absorption, as an Ectonurite has no life force in the conventional sense.

Ghostfreak can rotate his skull.

Ghostfreak has been shown levitating enemies, but only once.

Ghostfreak can peel back his skin, which reveals his tentacles.

Ghostfreak can possess life forms and take full control of them. Additionally, he can also use whatever abilities his victim possesses after taking control. Ghostfreak is also able to transform living creatures into Ectonurite minions.

Ghostfreak can withstand the vacuum of space and doesn't need to breathe. In fact, the darkness of space gives Ghostfreak the ability to use all of his powers at their fullest potential.

Ghostfreak can consume the souls of any being, living or dead.

Ghostfreak can release a powerful energy beam when his skin is peeled back.

Ghostfreak possesses powerful telekinetic abilities, the extent of which is still unknown.

All members of his race have their personalities genetically bonded to their DNA. A piece of DNA is all that is needed to re-create the same being entirely.

Since his race does not possess mana/life energy in the conventional sense, Ghostfreak is immune to life-energy absorption powers.

Ghostfreak's second skin inhibits many of his powers, but removing it makes him vulnerable to sunlight.

Though he is able to fly, he is not very fast in the air, and therefore must rely on his intangibility and invisibility to evade attacks.

His intangibility is useless when faced by another being that can go intangible.

Ghostfreak cannot possess beings who have no mind, like a zombie for example. 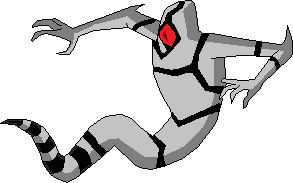 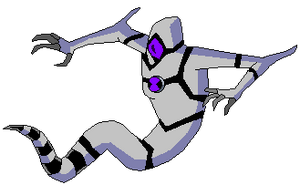 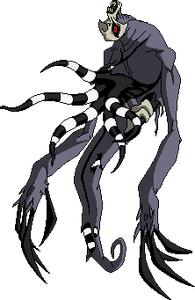 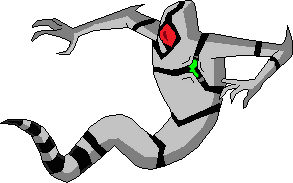