Ben 10 Fan Fiction Wiki
Register
Don't have an account?
Sign In
Advertisement
in: UltiVerse, Aliens, Ben 10: Protector of the Omniverse,
and 15 more

Ghostfreak is the Infinimatrix's DNA sample of an Ectonurite from the planet Anur Phaetos in the Anur System in Ben 10: Protector of the Omniverse. He is the Timeline 1 equivalent of the canon Ghostfreak.

Ghostfreak has his Ultimate Alien appearance, but the skin around his fingers and tail are missing, revealing the black claws and tail of his true form. He also has the facet joints that his true form has, though they are larger and more curved. In addition, his lines have been rearranged slightly. His colors match the color palette of Heroes United.

Ghostfreak has his Alien Force appearance, but he has black claws and grey-purple skin as well as small black spikes on the back of his hands. The facet joints on his back are larger and more curved. The pointed parts of his skull are longer. His colors match the color palette of Heroes United. 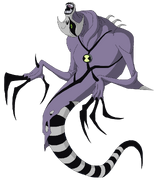 Ben hovers in a dark green background, with light green bubbles pulsating rapidly behind him, as he crouches down, his back curving unnaturally, growing longer. Ben's legs fuse together forming a tail as it grows and curls. His ring and pinky fingers merge into one, as his fingers grow longer and thinner and spikes protrude down his back. His skull turns upside down as his right eye disappears, while his left eye becomes diamond-shaped. His skin turns gray purple as some of it tears off from his tail. Finally, a second skin, colored white with black lines, covers his body. The Infinimatrix symbol pops out of his chest. Ghostfreak brandishes his claws, completing the transformation.

Ghostfreak's powers are composed of several aspects of traditional ghosts from myths and lore such as flight, levitation, phasing through solid matter, intangibility, invisibility, and body possession.

Ghostfreak is able to possess the bodies of his enemies and control their movements to the point where he can cause them to fly like himself, allowing him to freely slam them against walls or hit themselves. He can also access the abilities of other beings that possess superpowers.

Ghostfreak can make himself intangible and invisible as both a powerful defense and infiltrating high-security locations. Ghostfreak can choose to selectively make parts of himself corporeal or slightly corporeal. This extended technique can be used to interact with the world or fight while still intangible. It can also be used in a more deadly way by interacting with someone's internal body parts.

Ghostfreak is capable of making other objects or people intangible and transparent through physical contact.

Ghostfreak can use the tentacles under his second layer of skin as a means of scaring his enemies into submission. These tentacles can grow sharp thorns that can be used as lethal weapons.

Ghostfreak has an eerie, glowing eye that can move around his body, which is especially seen when he wears his outer skin.

Ghostfreak is immune to both an Ormerowon's zombification powers and Darkstar's energy absorption ability. This is because Ectonurites do not have mana, as they are not alive in the same conventional way that most other life forms are.

Ghostfreak can make people feel deathly cold by simply moving right through them.

Ghostfreak can alter his shape and deform like gas by making himself into a grey, somewhat transparent smoke-like wispy form. While in this form, he is immune to being absorbed by Gutrot's species.

Ghostfreak is able to disrupt electronics by phasing through them.

Like all Anur System aliens, Ghostfreak is immune to the effects of Corrodium and can see in the dark.

Due to being alive in a rather unconventional sense, Ghostfreak can survive in the vacuum of space.

Unlike all other Ectonurites, Ghostfreak is immune to sunlight due to some of Ben's DNA being within him.

Although he has never trained himself to do so, he can rotate his skull much like Zs'Skayr.

Ghostfreak can project powerful energy beams from either the tentacles in his chest and or his hands whenever his skin is peeled back.

Ghostfreak is capable of telekinesis.

If exposed to total darkness, like that of space, Ghostfreak's powers and abilities would be greatly enhanced to their full potential

Ghostfreak's intangibility is useless when faced by another being that can go intangible, as it will cancel out their ability to do so.

Ghostfreak's intangibility seems to require conscious thought to activate, so opponents will be able to hit him if he is caught off-guard.

There are certain beings Ghostfreak cannot possess. For example, he cannot possess zombies due to them lacking minds of their own.

There are a number of weaknesses that Ghostfreak is vulnerable to if he remains tangible. For example: