Ghostfreak is the Omnitrix's DNA sample of an Ectonurite from the planet Anur Phaetos in the Anur System in Earth-1010.

Ghostfreak is a tall pale green ghost with a gaseous appearance. He has black lines running along his body in many directions, one such line running around his face to form a vague mouth-like shape. His single green eye lies inside the crack along his face.

His body is trapped inside Green chains connecting his neck, arms, and waist to the Omnitrix symbol on his chest.

Ghostfreak possesses many powers typical of a ghost. The most immediately obvious is his ability to hover, become invisible, and become intangible. He can also apply his intangibility and invisibility to anything he is carrying.

Ghostfreak has the ability to possess people's bodies and control their movement. He can also apply his own flight, invisibility, and intangibility to the victim. He can access the special abilities of those he controls, should they have any.

He can use the tentacles from underneath his exo-skin as a means of scaring his opponents into submission. These tentacles are resistant to sunlight, and also possess super strength being much stronger than the rest of his body.

Ghostfreak has no conventional life force and is therefore immune to any attacks that would drain life force.

His eye is capable of moving along the black tracks running along his body.

Ghostfreak can survive in space. He also moves through water with no difficulty thanks to his intangibility.

Ghostfreak's true form is far more powerful in nearly every way than he is now, but is currently locked in by the chains covering his body.

Although he can fly, he is very slow compared to other flying creatures and aliens.

With the exception of the cracks in his body, his eye, and his tentacles, if his true form is ever exposed to sunlight it will begin to burn and rapidly decompose.

Ghostfreak cannot possess the minds of beings that do not have minds.

An Ectonurite's consciousness is bound to their very DNA. It is unclear if this is still true for Ghostfreak or if the chains somehow repress this.

Ghostfreak was scanned into the T2 Omnitrix's second playlist in The Only Good Necroterran from a civilian in the starship airport. He was used to approach Albedo unseen while he made a speech to the people of G'rrnay. 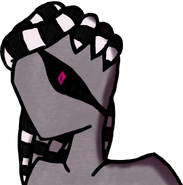 Gwen 10's Ghostfreak
Add an image to this gallery

Retrieved from "https://ben10fanfiction.fandom.com/wiki/Ghostfreak_(Earth-1010)?oldid=872302"
Community content is available under CC-BY-SA unless otherwise noted.