Ghost Brandon is a villain from the show,Brandon 10.

In the Original Series, Ghost Brandon resembles a humanoid Pesadila with a similar structure and features to Brandon, at the time.

In Alien Force, Ghost Brandon's appearance has changed majorly as he has become more of a ghost humanoid than a regular humanoid. He has a skull with peeled Pesadilla skin on the left side and a half Human-like face on the right side. There are some grey/blue-ish hairs on his skull but they almost seem unnoticeable. His eyes are also purple and his legs have turned into a tail.

Ghost Brandon is weakened by massive amounts of light such as sunlight and liquids that can cancel out his invisibility.

Ghost Brandon was created when his spirit has awakened within his DNA sample in the Omnitrix, Big Boo. When his spirit had awakened, it caused Big Boo to go mad for a moment before regaining his sanity. During that moment, however, Ghost Brandon released himself into the Nightmare Realm where Brandon had soon entered to find the source of Big Boo's mental instability. Unfortunately for Brandon, Ghost Brandon wanted to escape from the Nightmare Realm and gain more power. Brandon managed to outmaneuver him and escape the realm but not before destroying Ghost Brandon with a laser beam from his laboratory.

Although he was believed to be destroyed, Ghost Brandon still managed to infect three aliens into doing his bidding and eventually restoring him back to life. His main goal was to mutate the world with his dark matter but his plan was stopped by Brandon as he and the infected aliens, that he had cured, destroyed him again.

After a series of unknown events, Ghost Brandon was sent to a prison that orbited a sun, which had used its solar energy to torture him. However, The Conqueror had broken into the prison in order to gain information about "the ultimate device" from Ghost Brandon. When the Conqueror got what he had wanted, he destroyed Ghost Brandon by amplifying the lighting. However, Ghost Brandon survived and took over the Conqueror's body- leading him to his newly created home world, Conqueria, to construct a device that would open a portal from the Nightmare Realm so he can bring forth his army of Pesadilla minions. Brandon and his team, with the help of the Conqueror, later arrived on the planet and defeated Ghost Brandon by shutting down the portal, rewriting the DNA of the newly breed Pesadillas into the same mutated DNA of The Conqueror and absorbing Ghost Brandon back into the Omnitrix.﻿ 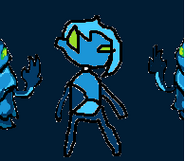 Ghost Brandon in The Nightmare Realm

Alien Force Ghost Brandon Draft
Add an image to this gallery
Retrieved from "https://ben10fanfiction.fandom.com/wiki/Ghost_Brandon?oldid=836018"
Community content is available under CC-BY-SA unless otherwise noted.