Geothermite is the Omnitrix's DNA sample of a Vesuviusapien from the planet Chione in Earth-1010.

Geothermite resembles a squat humanoid with rocky skin. There is a bulbous growth of magma on both forearms, upper arms, and one on his forehead. Cracks of magma run can be seen running across his body. He has piercing green eyes and no neck. The Omnitrix symbol appears on his chest.

Geothermite's main asset is his ability to generate and detonate rocks and minerals in his hands. He achieves this by channelling his internal magma into his hands, and cooling it in such a way that it becomes highly volatile. He also has great skill in manipulating rocks and the ground around him.

He has the ability to generate and manipulate streams of lava. He can generate these either internally and expel them, or by heating up and melting nearby minerals.

As an extension of his magma manipulation, he possesses a very limited degree of pyrokinesis. This ability extends about as far as starting fires and not much further.

He is completely immune to fire-based attacks and highly resistant to any feasible kind of cryokinetic attack short of absolute zero.

Although highly resistant to external ice-based attacks, if his internal magma was somehow frozen he would die.

Although as hot as magma, the bulbous points on his head and arms are technically his most vulnerable areas.

Geothermite is vulnerable to being submerged. Doing so can cause the external-most layers of his internal magma to freeze. Although this alone is not deadly to him, it can paralyse him and cause him to drown.

Geothermite was used by Ultimate Ben 10'000 as an Aspect Transformation of his Ultimate Ben form. He was used to help Ben 23 and Ben 23'000 break into San Diego Ironworks.

Geothermite was the first alien that Ben used while having access to the Apprentice Control of the T2 Omnitrix in Burning Bridges. The alien was forced to be the default form during Ben's time on Pyros in From The Ashes as Ben would die if he returned to his human form on the planet.

Ben used Geothermite in The Only Good Necroterran to fight Electrockutioner. Geothermite defeated Espionage but was defeated himself when Albedo returned to Electrockutioner. Ben tried to use Geothermite in Life On Mars to destroy Spirit of Man, but was attacked by Dead London instead. He attempted to fight Dead London, finding that detonating his explosive rocks around the monster instead of on it was more effective, but was ultimately defeated and nearly killed.

In Tides of War, Geothermite was used to raid an Electrovile prison and set the prisoners free. 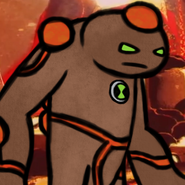 Geothermite in From The Ashes