Agent Georgia is the Freelancer's pilot for Project Freelancer in Bryce Bowman: Origins

Georgia is a female Freelancer who pilots the Pelican Class Dropship, otherwise known as the "Pelican", that takes the Agents to and from missions. She wears "Orbital Drop Shock Trooper" armor, designated as "ODST".

It is clear that she is somewhat laid back, due to her casual use of the phrase "(x) minutes, tops". Nothing else is known.

Being a pilot, she has had extensive training in flying airships of all kinds, but she specializes in Dropships. It is known that she can perform advanced maneuvers that most pilots would fail at. 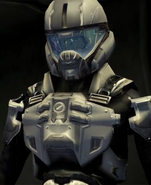