He is a fusion between Echo Echo and ChamAlien.

Gecko Gecko has the main body shape of ChamAlien, with the white containment suit of Echo Echo. He has cassette tape-like growths on his legs.

He has three green eyes, and a green mouth with lines inside giving the appearance of a speaker. The Biomnitrix symbol is on his chest.

Gecko Gecko possesses the ability to scream at audible to ultrasonic frequencies, capable of incapacitating people, overloading machinery, or even stopping projectiles mid-flight.

He also has enhanced flexibility and agility.

Gecko Gecko does not actually turn invisible, only change his colour. This means that he still casts a shadow.

He can be tracked by beings who can sense mana, or beings with enhanced smelling or echolocation. 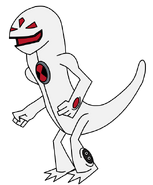