Gas Manipulation
Gas Projection
Gas Immunity
Enhanced Strength
Enhanced Intelligence
The Gastulences are a species from the planet Gasceomestry, and are Gutrot's species in Earth-2018 and Earth-1799.A.

Gastulences are humanoids with black spots on their skin and four fingers. Like Orishans, they have nozzles/openings from where they can eject different types of gas. They are located on various parts on their body. They have glass on their stomach from where the gas inside can be seen.

Gastulences communicate with both a verbal and a pheromonal language.

Gastulences are a peaceful, scientifically advanced race. They have learned to harness the gaseous enivronment of their planet in both a technological and biological way.

Gastulences developed gas mask-styled regulators to wear on their faces to help them take in the more toxic gases of their planet, which eventually changed their inner biology. Their biology has also changed in the way of genetically engineering themselves to have nozzles on their bodies to secrete gases. They have also been given clear stomachs which their inner gases, but was mainly put there in the event of a disease getting through their gas masks. 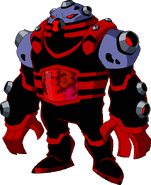