Ben 10 Fan Fiction Wiki
Register
Don't have an account?
Sign In
Advertisement
in: Aliens, Brandon 10, Aliens in Brandon 10,
and 16 more

Gasadactyl is an alien transformation from the show, Brandon 10.

In The Original Series, Gasadactyl resembles a light-brown petrodactyl with a long, yellow beak and yellow flaps inbetween his arms and legs. The Omnitrix symbol is mounted onto a black brace located inbetween his neck and shoulder.

In Ultimate Hero, Gasadactyl looks simiar to his appearance in The Original Series however his arms are thinner while his muscles have gotten slightly buffer. His elbow bones are now sticking out and the yellow flaps inbetween his arms and legs have grown more as it extends inbetween his legs; it also contains more wrinkles. There is now a jaggered, black line forming from his back to his chest. His eyes are more narrow and his head is more pointier. The Ultimatrix is on his chest.

Gasadactyl can fly at tremendous heights and has enhanced speed when flying. He also can hang from high places using his feet. Gasadactyl has the ability to produce gas from his beak which can stun enemies with its foul smell. He can also change the gas from a neutral yet bad oder to a poisionous and acidic one. Gasadactyl is also strong enough to carry two passengers and attack with his hands.

Gasadactyl's gas can be ignited into flames which can cause physical harm to him if he gets too close. Gasadactyl also can't fly if his wings are trapped, injured or dislocated. Gasadactyl also smells awfully which can be an offset to neutrals and allies.

Gasadactyl in the Original Series Titles 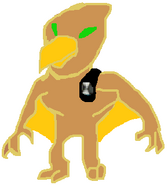 Gasadactyl in The Original Series 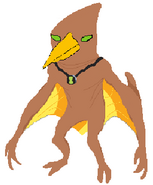