Gargoyell has the general appearance of a gargoyle, however lacking wings, and has a large hunchback. He has ram horns on his forehead and metallic plating around his whole face, save for his one beady, orange eye. On his forehead is an orange, glowing hole, with sound waves spiraling out. His shoulders are bulky while the rest of his arms are slimmer with robotic parts built in, primarily on his forearm and around his wrist. His hands are completely metallic with holes on his palms, as well as wires embedded in his skin, which act as protruding veins. On his chest is the design of a sonic frequency graph. On his lower abdomen is another "hole" similar to the one atop his forehead, with wires extending from inside of it and entering into his body. He has black shorts on with robotic parts covering everything below his knees.

The Gammatrix is located on the left side of his chest.

Gargoyell's powers include the following: 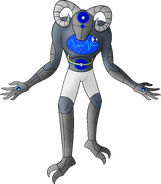