Start a Wiki
Ganglione (pronounced gang-lee-own) is a alien who has a few uses. He is kind of powerful, but not used too much due to it's weaknesses. It was originally made for some dumb series by Rob called Ben 10: Aliens Unleashed. He has so far appeared in Rob's series, Mack 10.

Ganglione has big, floppy ears. It has no toes. It's head is very big, and the body is small.

Ganglione if he were in UA

Ganglione if he were in Omniverse 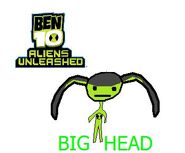 Minecraft Big Head, also by Joe
Add an image to this gallery
Retrieved from "https://ben10fanfiction.fandom.com/wiki/Ganglione?oldid=812014"
Community content is available under CC-BY-SA unless otherwise noted.