The Gammatrix is a device worn by Miguel Rivers in Mig X: Revolution, and later used in Project Deca.

It is the successor to the original Gammatrix as a result of Mig desiring more practical functionality with his Gamma Energy.

Retaining the same primary perk as its predecessor, the Gammatrix allows for the user to access a database of ten alien DNA samples acquired across the universe by Tekk.

Unlike its predecessor however, this Gammatrix has a combat mode that can be activated which forms mechanized gauntlets around one's hand or hands if connected to the free hand. These gauntlets, specifically designed for Mig, allow for Gamma Energy to be channeled directly through a conduit and utilized for combat in a much more practical and safe manner.

Alien selection on the Gammatrix works as holograms. Releasing the core of the Gammatrix and twisting the dial 45 degrees produces a hologram of a random alien available in the Gammatrix. If cycled through but not used for transformation, the last alien's hologram will appear first if the Gammatrix core is activated in the future. 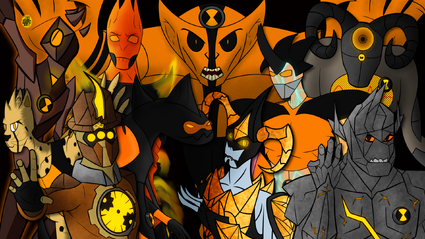 Trivia
Retrieved from "https://ben10fanfiction.fandom.com/wiki/Gammatrix?oldid=873259"
Community content is available under CC-BY-SA unless otherwise noted.