Start a Wiki
Galvanic Primus is the former homeworld of the Galvans. Later taken by the Galvanic Mechamorph and the Neo Mechamorph. It is another setting for Bax 10: When Omnitrixes Collides

From space, Galvanic Primus has mechanized geography with a dark green and purple neon brighten color representing the cities and the most active places. What it looks to have the same crater from Galvan Prime (Large Black Spot).

Galvan Prime was formerly the homeworld of Galvans living along side with the Galvanic Mechamorphs and the Neo Mechamorphs. The moon began to overpopulate with new Mechamorphs but didn't want to destroy half of them creating genocide neither did the Galvans so they've expanded to more worlds outside the Galvan's system.

Until the invasion of King Ucrona coming for the DNA Alterer device which is known now as the Baxatrix. They witness the planet's destruction destroying Galvan Prime the creators home planet. It is unknown if the Galvans have gone extinct or if some managed to escape but they know that now it's uninhabitable. So to honor them they consume the planet and rebuilt into their own cyber organic mechamorphian living planet naming it; Galvanic Primus. 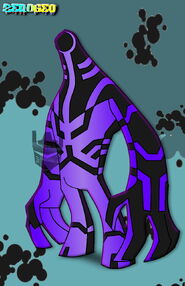 RAM City
Add an image to this gallery

Retrieved from "https://ben10fanfiction.fandom.com/wiki/Galvanic_Primus_(Planet)?oldid=807679"
Community content is available under CC-BY-SA unless otherwise noted.