Galileans are bulky, gravity-controlling aliens with rocks covering their bodies.

Galileans do not live on planets, as they themselves are tiny planets. They live in space and orbit their sun.

At some point in their life cycle, Galileans orbit Keplorr.

Galileans are bulky, rock armored aliens. They are reddish-brown in color and have a red/orange core on the center of their chest, and have four reddish-brown fingers and three grey toes. They have black markings on their face, as well as a big mouth.

According to Max, Galileans are known to be wise and patient.

Galileans have the ability to manipulate gravity; to either make objects lighter than air or incredibly heavy.

Galileans can levitate via gravity manipulation.

Galileans can make objects orbit around them and can roll up into a planetary sphere.

If a Galilean takes large amounts of damage to their core, they could meltdown and explode, much like an actual planet.

As shown in For a Few Brains More, sudden changes in mass can throw off a Galilean's orbit. 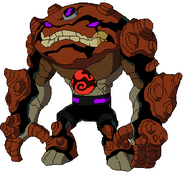 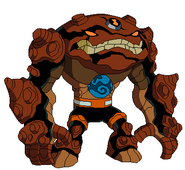 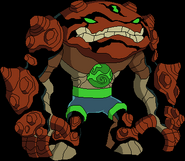 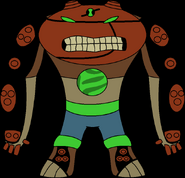 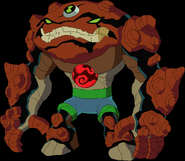 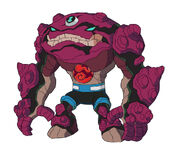