GIR is an alien in Ben 10: Backyard Adventures. It comes from the show Invader Zim. Credit for the sprite goes to Solo28. If it blows up, nothing happens to it. He also appears in Noah 10.

As a robot, GIR has a little antennae at the top of his head. His head's shape is kind of like a mixture of an oval, a trapezoid, and an square. GIR has two eye sockets, and at the front of them are large green robotic eyes. It has a small neck. On it's stumick, in the middle is a little green box. It's completely grey and green.

Disguised as a puppy

As a puppy, it is completely green with a grey zipper going down the middle of it's stomach. It's eyes are huge, and have small pupils. It has dog ears that go up and then turn sideways. It's arms and feet are black, and are also stitched on. It's mouth hole is a black area with a sewed on pink tongue. 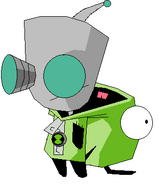 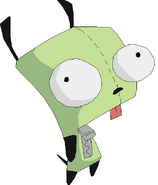 Retrieved from "https://ben10fanfiction.fandom.com/wiki/GIR?oldid=914334"
Community content is available under CC-BY-SA unless otherwise noted.