The Fulmini are a well-feared race of energy-based warlords from the planet Fulmas. Their war burns eternally across dozens of planets and multiple galaxies. With enough of them in one place, they can create portals that allow them to stride across the cosmos effortlessly.

The most blessed of those to participate in the genetic lottery of the Fulmini are the Superior Fulmini. These incredibly powerful entities possess the willpower to exert themselves over other Fulmini, though ultimately only one mind can reign supreme at any one time. At present, this force is High Override, but this can change it the populace loses faith in his ability to bring them victory and conquest.

Fulmini are made entirely energy, typically blue and reinforced with grey rock armour that covers their head, chest, shoulders, some of their forearms, and everything from the thighs down. This rock has a green moss-like pattern on its surface nearest the top of the body.

The Females more thinner armour than males, but the moss is pale pink and they have rock skirts

Fulmini have the ability to release strong, blue electrical charges from any part of their bodies.

Fulmini are able to absorb and produce electricity. They can control it with great skill. Shock Rock has demonstrated the ability to generate large electrical constructs shaped like a boomerang.

Their electrical powers can be drained.

They can be controlled by Superior Fulmini, such as High Override.

Fulmini is derived from Fulmine, the Italian word for lightning. It may also be derived from the word 'Fulminate' which, in a literary sense, means to explode violently or flash like lightning.

Fulmini may also be a portmanteau of Fulmine and mini, effectively calling them little balls of lightning. 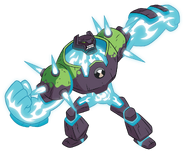 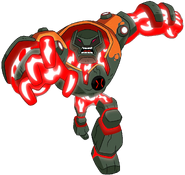 Electrockutioner
Add an image to this gallery
Retrieved from "https://ben10fanfiction.fandom.com/wiki/Fulmini?oldid=912267"
Community content is available under CC-BY-SA unless otherwise noted.