Freezemore is a very sharp and cold alien. He is tall and is skinny, but sharp in some areas. Freezemore has 3 spikes on his head, with a very pig-like nose. Freezemore also has two sharp teeth made out of solid snow.

Freezemore wears a similar outfit to Diamondhead, with a small "v" cut on the top of it. Freezemore's arms are all made out of ice, and he has sharp fingers. His tail is very long yet solid, and it has a very "squiggly", "zig-zag" pig-like tail.

Beyond Freezemore's icy skin, which is considered armor, is a snowy humanoid. He still resembles himself with the ice skin, but he's less sharp, his tail is much shorter and smaller, and has no spikes on his head. He still retains his snow teeth however.

Being an Ice Alien, he is able to shoot ice beams, and freeze objects and people. This also makes him immune to all ice attacks. He is able to duplicate himself with his ice abilities, and absorb ice. He can also absorb room temperature cold, so much so that he is able to make the room hot.

Freezemore has a great amount of strength and durability.

Freezemore has a sharp tail that can cut through stone.

Freezemore, if the weather is windy, is able to make Ice Tornadoes that can freeze anything in its path. It can be controlled by Freezemore as well, and can work on live tornadoes.

Heat can slow Freezemore down, but not kill him.

Radiation can effect Freezemore greatly, it can even kill him.

Freezemore's icey skin can break with enough force and power, or enough heat. Once it's broken down, there will only be a snowwy humanoid, who will just fall due to being made out of snow. 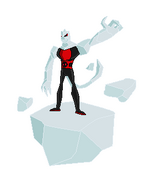 Add an image to this gallery
Retrieved from "https://ben10fanfiction.fandom.com/wiki/Freezemore?oldid=901628"
Community content is available under CC-BY-SA unless otherwise noted.